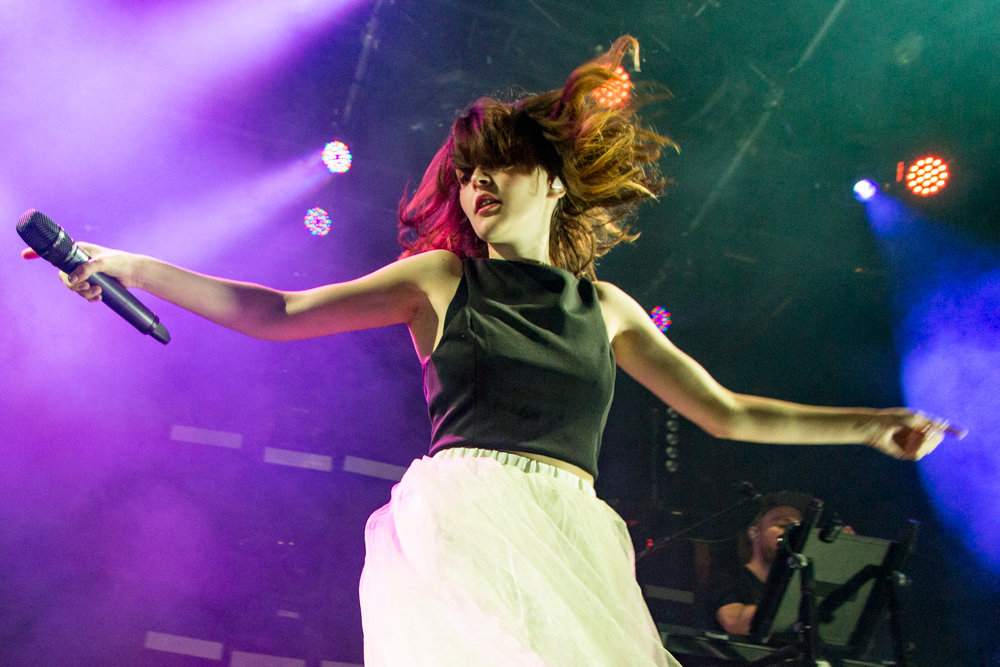 A is for Americana: like the epic grooves of pedal steel and crooning laid out by Israel Nash during his mainstage, full-band set. Thoroughly organic and instrumentally-dense, Nash went for it with desperate vocals and a twinge of psych-rock. B is for Big Band: It’s not just the sheer size of The Dip – at seven plus members – that counts, it’s the amount of funky, soulful groove they wield. The group opened day one of CHBP with a major horn section and a deep-running jazz influence for a set that had people dancing right off the bat. C is for Conversation: the real ones happening at two stellar panel discussions that opened the festival, featuring local artists and industry movers and shakers talking about how to get your band heard (and paid) in Seattle’s scene. D is for Dreamy: like the glowing layers of analog existentialism that Portland’s Pure Bathing Culture doled out with a smile. Their foggy, layered indie-pop radiated in the night, full of bright melodies and thick atmosphere. E is for Explosive: Head Wound City – the reincarnated California punk band comprised of members of The Blood Brothers, Yeah Yeah Yeahs, and The Locust – ripped open the Vera stage with high-throttle rhythm and serious screams. F is for Fifteen: as in the approximate number of minutes it took werewolf-fronted punk band Wolfgang Fuck to complete their entire set, including the crowd spilling beers and trampling on (in the friendliest, most encouraging way) the lead singer. G is for Guiltless: like Lisa Prank and her particularly 90s brand of saucy, heart-on-sleeve pop-punk with an exclamation mark. Humor, heat, and #allthefeels filled Cha Cha as Robin Edwards gave her all to a packed house. H is for Headspace: the kind you should keep open while listening to local hip-hop artist Do Normaal – neé Christy Karefa-Johnson – who conveys death, humor, and beauty in her deeply, poetically personal rhymes. I is for Intergalactic: like the spacey trip-rock of The Spider Ferns, a local husband and wife outfit, that spun organic yarns of atmosphere through the heat of Neumos. Light and textile installations, haunting vocal stylings, and deep bass beats ran rampant. J is for Jet-lagged: how Chvrches felt as they closed out the entire festival, as lead singer Lauren Mayberry noted that between that, the drones flying over the crowd, the people swinging out of an adjacent building, and the bird that shat on her head earlier, they were having a red-letter day and feeling just slightly crazy. But not to worry – it certainly didn’t show as the Scottish three-piece gave a show-stopping performance, where we all danced, and fell just a little more in love, with, frankly, everything. K is for Kinetic: like Lonnie Angle’s moves. The Cardiknox lead singer – clad in rainbow-splattered athleisure-wear – kept things popping for the entirety of the band’s set as they crushed their way through a dynamic set of 80s-influenced synth-pop to a crowd who knew all the words. L is for Ladies’ Man: the enigmatic Tilson XOXO, accompanied by both live drums and guitar, swaggered through a set of rhymes so perfectly smooth it was impossible to resist. Plus, he wins for best fashion statement with an eye-blearingly cool mix of patterns. M is for Mariah: Carey that is, who adorned the t-shirt of Toronto alt-rock band Dilly Dally‘s lead singer/guitarist Katie Monks. A perfect foil for her infectious, explicit howl set to guttural, 90’s-revivalist #softgrunge. N is for Nerve Endings: the ones that stood on goosebumped point as The Cave Singers swung through their solid set of folk-rock with pulsing energy. From foot-stomping fun to the emotional wailing of singer Pete Quirk, to the frenetic inability to stand still, live, this band is such good stuff.

O is for Overdrive: A gear that Thunderpussy seem to live comfortably at. Their high-octane set – de rigueur for the band – is one to watch, full of preening and high-kicks, shredding guitars, and demanding beats. With a debut album on the horizon, there’s very little to stop them from world domination. P is for Pool Party: of which STRFKR threw the best. No mind that there was no actual swimming pool involved. Flamingo floats, inflatable dinosaurs, crowd-surfing astronauts, and the biggest, most joyful dance party of the weekend.

Q is for Queen: and while you might be tempted to file SassyBlack under “S” her rightful place is holding down the throne as the reigning champ of electro-soul. Sure, she slings it with sass, with those adorable dimples, with that smooth energy. Like I said, Queen. R is for Rock and Roll: the kind served straight-up by Duke Evers, who packed in a crowd at Neumos for a rip-roaring set of ultra-catchy tracks that left the room sweaty with enthusiasm. They’re like classic-rock incarnate: vintage flair, preening dance moves, inspired chemistry, with a debut full-length on the way this fall. S is for Sunshine: rays of which glimmered through Tangerine‘s playfully balanced mix of surfy reverb and R&B as it floated over the crowd. The band gets more impressive by the minute, their buoyant melodies and coming-of-age attitude reading like a “next big thing” should. T is for Trance: the kind that Pillar Point creates with his magical synth-pop loops and layers, analog beats meshing with enthusiastically 80s guitar. There’s an involuntary nature to the music that comes out of his set, as he bangs the drum pad with his guitar, or slides across the stage. U is for Unique: which Iska Dhaff embodies in spades. The envelope-pushing twosome went all-out with an energetic set of alt-pop that pulsed with rhythm and meditations on human nature. They’re all about jumping into the crowd, making you move, and staying mindful, a combination as intriguing as it is infectious. V is for Visuals: like the kind of dark, artsy stuff that dreams are made of, or at least J GRGRY‘s. The dark-pop band spewed forth with their synthy, sweaty goodness set to a scene of streaked black makeup and flickering nature projections. They’re one to both watch live and listen too in the dark of night. W is for Weird: in a good way, like the catchy, offbeat vibes that ran through Danish singer MØ‘s set, which set arms waving to her eclectically magnetic tracks. Easily connecting with the crowd, and getting right up next to them, the vocalist matched swirling electro-pop with passionate persona. X is for eXpectations (go with it): the ones that were blown by Welsh rock trio The Joy Formidable. Diving head-first into a fervent, gnarling set, each member shone individually, yet their chemistry had a wink and a smile. Powerful guitars matched brilliantly with a riptide of INSANE drumming for a set that left us breathless. Y is for Yen: as in “a strong desire, yearning, or craving,” like the one we have to keep hearing Maiah Manser deliver her intriguingly layered vocal stylings, which she performed with her full live band, creating a darkly lush wall of sound. Z is for Zoo: as in, the crowd gathered by electronic duo Odesza. These hometown guys closed out the second night of CHBP with massive bass beats, guest vocalists, and a transcendent dance party.