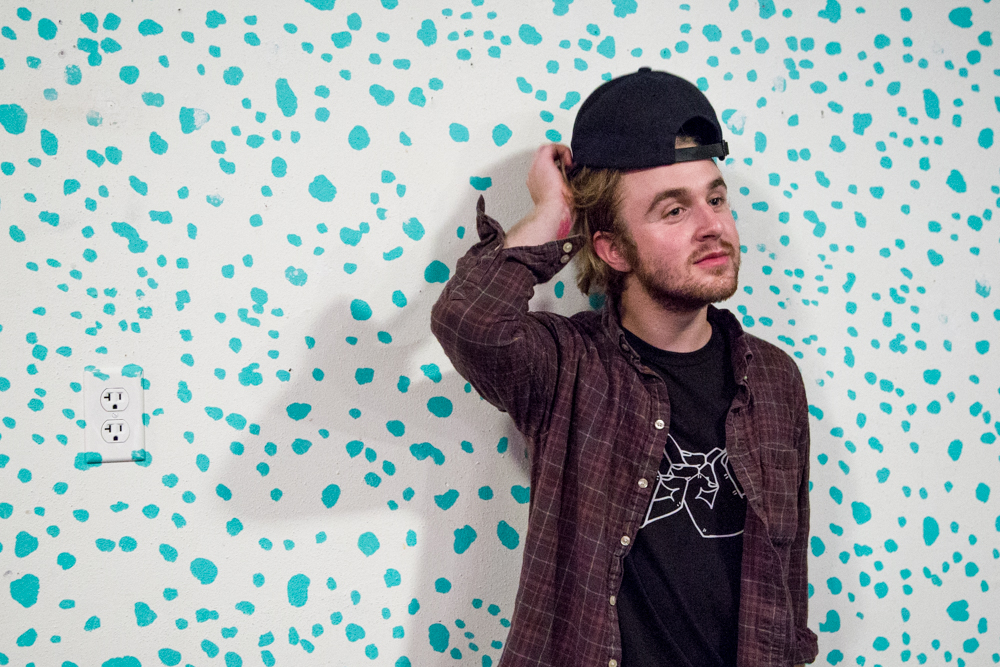 It’s one-thirty in the morning and Seattle’s Hibou, a jangly, bedroom-pop outfit courtesy of Peter Michel, just finished closing out an after-party show at the inaugural CHANNEL Fest at Fred Wildlife Refuge. The band’s set had the crowd dancing and singing along, the full live band giving power to tracks recorded by Michel solo in a bedroom closet. We grabbed Michel for a quick sit-down to chat about what he’s up to.

Seattle Music News: So your full length came out almost a year ago now.
Peter Michel: Yeah it’s coming up on a year.

SMN: And you’ve been touring pretty actively. Other than Seattle, what’s been your favorite place to play?
PM: Any cities on the West Coast I think are really fun to play, always. It seems like there’s always a built-in audience there that will show up to watch our music, which is super cool. It’s dangerous territory. I love playing on the Midwest and East Coast, but we gotta work up to it, there’s not a whole lot of people coming out to those shows yet. But any shows in San Francisco, Los Angeles, San Diego, those are a blast to play every time.

SMN: So how did the Barsuk deal come about for you?
PM: I suppose my manager at the time told me that a few record labels were interested, and we had a breakfast meeting with Barsuk. And first of all, they bought me eggs benedict, which was like okay…
SMN: Killer.
PM: Ha, yeah. But no, we met several times with Barsuk. There was just a connection and it sounds kind of cheesy but there was something about ‘em that was really, notably comforting. And now it’s a year later and they’re still the most genuine, amazing people to me, so I think I made a good call there. I chose them.

SMN: And you’re still comfortable with it.
PM: Yeah totally. And it’s amazing cause you hear so many horror stories about working with industry folk when you’re a musician. So it’s really scary to make any move. But with Barsuk they’ve just been the most supportive people you’d ever want to work with.

SMN: That’s great. Was it important to you that they were a local label?
PM: You know, it definitely helped because we were able to meet in person and establish something, go to their office, and see what they were all about. I think I would have been a little more hesitant if it was some label in another city and it was all just through emails or something. I don’t know if I would’ve been able to do that. And especially because they’ve signed a lot of local Seattle bands too, that I’ve grown up listening to, that definitely helped.

SMN: So a year and a half into the cycle, are you working on new music again?
PM: Yeah definitely, the new record is over halfway done, done being written, and we’re gonna take it to the studio. It’s gonna be a different process. The last record was all recorded in my bedroom closet and then mixed and mastered in LA. But now that I’ve found some really cool musicians… I mean, Jay, who was playing the drums, I’m pretty confident is the best drummer in Seattle, he’s fucking amazing. So he’s gonna be all over the new record. And Sam playing guitar.

So the songwriting process is pretty similar, they’re pop-driven, dreamy, jangly kind of songs, but I think it’s gonna sound really different when Jay and Sam and whoever else come into the studio.
SMN: More like the live band doing the actual recording?
PM: Yeah, it’ll match up to the sound. Because I didn’t even really know what I was doing at the time when I wrote the first record. It came out good, I think, but I’m super stoked for the next one.

SMN: So I’ve read a lot about the whole Discovery Park thing [Michel has often spoken about the inspiration he found at the park while working on his debut], but do you have any other favorite places in Seattle?
PM: I live right by Green Lake, that’s pretty cool. There’s this little nook of grass and really tall trees, and you always see people slack-lining there, and I’ve been going down there a lot lately. And actually, I am a slack-line owner, guilty.
SMN: It comes out.
PM: Yeah. We set it up, do like one thing, and then just leave it up to look cool. But it’s nice, and you can jump in the water right there. I’ve been gone most of the summer though and I’m about to leave again. I haven’t even jumped in Green Lake this whole summer!

SMN: Are you off for more touring?
PM: No I’m just vacationing.

SMN: Nice, taking a little break. So we have this festival, and a lot of things happening in the Seattle music community lately, what’s your take on it?
PM: I don’t know. The music scene in Seattle… It’s a mystery to me.

SMN: Is it? Still?
PM: Yeah. I don’t really understand. There’s a crowd for every single kind of anything that’s going on. I think a good example is, have you heard of Your Young Body?

SMN: Yeah!
PM: Yeah, so those are some friends of mine, and it’s like they’re this totally different thing, but there’s this whole scene for that kind of music. That’s something that I really respect about Seattle.

When you get down to the roots, it seems like when these things are happening, there’s not that many people that are putting 100% effort into going to those events and shows, but I don’t think it’s any different for any other city.

It’s really easy to be involved in something over social media and then when it comes to actually supporting it in real life it’s kind of different. But that’s just my take on it.

A lot of those bands, like So Pitted, they’ve done amazing. They’re on Sub Pop now and everything, and they’re amazing, but they’re playing shows, and there’s not that many people showing up but they’re freaking amazing. They’re the heart and soul, I think right now, and bands like Fauna Shade and Sloucher and Ruler, and all those guys.

We were at the Sloucher release show yesterday and there were so many people coming up to me like “Is this all original music, who are they covering right now?” And I’m just like, “Nah this is all original music.” So I don’t know if there’s just too much going on?

SMN: Yeah, there’s a ton of really good, smaller bands that are all across the board with different music, but it does seem like somebody’s out there who’s willing to listen.
PM: Exactly, yeah.

SMN: But also with something like CHANNEL Fest, I had no idea there were this many local indie record labels around town.
PM: Me either! And I put that on me as well, I was reading the list, like I don’t know this one, this one, this one… so I’m guilty as well.
SMN: But that’s a lot of support there that you don’t realize until you throw ‘em all into one room.
PM: and that’s why this is awesome. There should be more stuff like this.

SMN: Totally. So if you had to pick your ideal show of Seattle bands to go see, who would be on the lineup?
PM: do they have to be living?
SMN: Yeah, current bands.
PM: Honestly, last night was my ideal. It was Fauna Shade, Bod, and Sloucher. And maybe if you threw Tangerine in there, and Your Young Body. That’s good right there.
SMN: So like a full day show.
PM: Yeah, maybe a little festival.

SMN: Last question. You’re stranded on a desert island and you get one book, one movie, and one album, what are they?
PM: My book would be The Lord of The Rings.
SMN: All of the volumes?
PM: Well originally, it was one book, so I call dibs on all of it. My movie? I’ll choose The Triplets of Belleville, I think I would be happy with that for a while.

What was the last thing?
SMN: An album.
PM: I think I would do Graceland, Paul Simon.

Interview and photos by Stephanie Dore